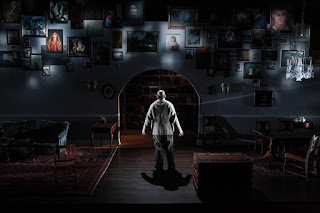 I went to see the current production of A SPLINTERED SOUL by Alan Lester Brooks at Stage 773 at the end of its run (closing May 29). It has already been reviewed so I won't cover that terrain. What I'd like to think about is what are the uses of the Holocaust, and when does it become just another way to provide entertainment or even be misappropriated for other agendas?


Saul Friedlander, the Holocaust historian and survivor, talks about Holocaust regarding popular culture and the thrust of his point is - when is the catastrophe of the Holocaust relegated to bumper sticker slogans? When do stories and performances that use the Holocaust just become a meme that can be used to define and explain seemingly anything? Recent misappropriate comparisons include Brazil's President Dilma Roussef who said that attempts to impeach her over corruption scandals are similar to the Nazi persecution of Jews. The Chief Justice of Alabama, Roy Moore, defied the legalization of gay marriage in the United States and compared it to the Nuremberg Laws of Germany that made Jews and their full citizenship illegal. His point (I find this reasoning convoluted) is that those (often fundamentalist Christians) who don't agree with the legalization are an oppressed minority. Ben Carson, the Republican candidate, made a remark while on the campaign trail that "if Jews had owned guns, the Holocaust wouldn’t have happened." This was meant to endear him to gun rights advocates who feel themselves to be an oppressed people like the Jews, and who, in his opinion, may have to take up arms against the United States government.


There seems to be a pattern that Jews are a symbol for all minorities to compare themselves themselves to, and that the Holocaust is transferable to any kind of perceived and or even real threat of oppression. I am under no illusions that many Jews and the Jewish community partake in feeding this idea, rightly or wrongly. The proliferation of Holocaust museums built due to Jewish philanthropic dollars as well as other foundations and donors not only are a testament to "Never Again" but also to the effort to stop other atrocities and catastrophes that utilize hate, fear, racism, and other means to create prejudice (governmental or from others) towards an oppressed group.


This can be seen in performances and appropriately so, as well. For example the newest version of Cabaret, by Fred Ebb and John Kander, augmented the ending and made a point to emphasize homophobia under the Nazis. The recent version of Fiddler on the Roof by Harnick, Bock and Stein (all Jews) on Broadway takes the beginning and end of the play to point towards the destruction that was to come to the Jews after Tevye and the inhabitants leave Anatevka. These changes and layering Holocaust foreshadowing make sense in these cases as they show the extension of anti-Semitism and exile, that with the knowledge of history, links it to the Holocaust.


So when Alan Lester Brooks repurposes the Holocaust narrative to write a tense and psychological drama about a rabbi who is a Holocaust survivor, and uses it to try to understand the conflictual attitudes within the Jewish community towards Jewish immigrants to America from the Holocaust, many critics and audiences drew comparisons to the refugees from Syria and other lands who are in exile right now looking for safe haven. As one of the Jewish characters who is sponsoring one of the refugees says, "You are safe now."

Yet the story isn't just about the Jewish immigrants after the Holocaust getting take care of in a new land, but shows the PTSD that is still to be dealt with by survivors. We see it in a story about one of the woman survivors who is placed as a domestic worker in the home of a well-off Jewish couple in San Francisco. She falls in love with the husband and she sees it as a way to overcome her fears and anxieties and take her life back. 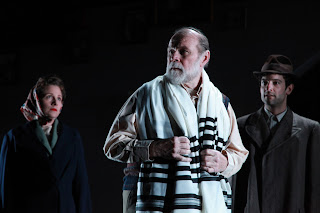 But the main plotline develops through group sessions that the survivors regularly attend with the rabbi, who is the protagonist. They feel the need to have this meeting as an insider "tribe" and to give each other advice, peer counseling, and solace. Yet they remain outsiders to the Jewish community and the rabbi realizes that he must be a redeemer for them to get acclimated to America and to run interference for them with their Jewish sponsors. But then as a result of the group of survivors that regularly meets, the rabbi is asked to help in a situation of abuse and illegal activity which ultimately leads to the murder a of German man in their city of San Francisco. The rest of the play is about solving this murder.


By setting the time period to immediately after the war, Brooks backshadows the controversies of today. On a certain level he seems to want Jews to get over the Holocaust since it can lead to tribalness, outsiderness, murder, and sociopathology; and on the other hand he blames Jews for not treating Jewish survivors with dignity.


He also seems to be saying that the memories of the Holocaust are used by Jews to justify themselves in all that they do. He references Jews going to Palestine after the war and thereby makes the worst in an inappropriate political comparison. These references conjure the Holocaust in a simple minded way, as a bogus justification for why Israel was created through the feelings of sorrow for Jews after the Holocaust and demanding reparations for Jewish claims. When a con game is revealed in the play, this con in the playwright's mind is a symbol for Jews who trust in Jewish claims over others. The reality and more complex story is that Jews have always lived in the land now called Israel, since ancient times, and after resettlement from other lands that oppressed them, started the process of creating the modern country of Israel even while some Arabs accepted them and some rejected their return, all happening about fifty years before the Holocaust which wiped out a third of the world's Jewish population.


In the early 1960s the film The Pawnbroker told a story about a concentration camp survivor who can't live as an emotionally healthy man. The film's narrative takes many twists and turns to understand prejudice, outsiders in society, oppressed minorities, racism, and the drug and prostitution world in Harlem in New York City. Yet the film lives on as a searing testimony of the Holocaust due to the performance of Rod Steiger, who combats his inner torment. The story and performance by Steiger transcends the facile comparisons to the inner city and goes deeply into the psychological core of this one Jewish man wrestling with his pain and loss and the meaning of being a Jew and a human being.


Another excellent example of portraying the Holocaust is Son of Saul the recent Academy Award Winner for Best Foreign Language film.  It tells a story of the inner dimensions of a Jewish sonderkommando who is reduced to a non-human being. Yet his awakening is revealed to us throughout the film and all the side stories in it, though necessary to the plot, are in service to and do not intrude on what is important -- that the Holocaust is both inexplicable and must continue to explained.
Posted by David Chack at 8:45 AM